Created an account with skype, since I’ve completely blanked on what my old one was. My new username is willscott.name. There’s a status widget to contact me on the contact page to check if I’m online with either google or skype.

I arrived at 10:20, and got in line behind the Rockstar stage. I was probably a couple hundred people back, but in contrast to the size of the line I was near the front. The line moved very quickly at 11, with a bunch of volunteers scanning tickets. Got in, got my hand stamped for re-entry, got a main stage ticket, and picked up my kexp session ticket.

Got to the SIFF festival, and it was completely deserted. They started with 20 or 30 people in the theater for the 12 o’ clock session. The first movie, about a dancer considering an abortion was quite well filmed, but the second was a disappointment and lacked any real story. The three films in the second hour were all really good.

Left the film festival to go get something to eat. There was a long line I passed to get into the 2-3 session, which was somewhat surprising. Sat on the lawn while eating lunch and listened to Mark Pickerel. (R&B, with a sizable crowd of mostly families and older folks.)

Decided that I’d try and get to the exhibition hall early for dan deacon, since it was already open for the earlier band. I got in a few minutes before the show started, and got right in front of the sound station. I was lucky because it meant I could sit on a railing and see over most people’s head and catch a glimpse of the band every once in a while (they were playing on the floor, and so only the people right around them could actually see them.) They got cut off after a couple songs because they were being too dangerous, which was probably a good decision. The only other notable feature of the band was that their singer had a very strong resemblance to frank zappa.

Definitely the highlight of the day (and the reason I came). I wandered around after the other concert got shut down, listened to some langhorn slim, and the end of the physics, and then got in line for the exhibition hall. I was probably 20 or 30 back in line, and was one person away from the table. Shortly after the doors opened Dan came in with a plastic bowl of almonds, presumably from the VIP area backstage, and passed it around. The show had a lot of energy, and he did a good job of giving people things to do besides mobbing him. (namely dance offs, relay races, and conga lines) It was a lot of fun, and good music. 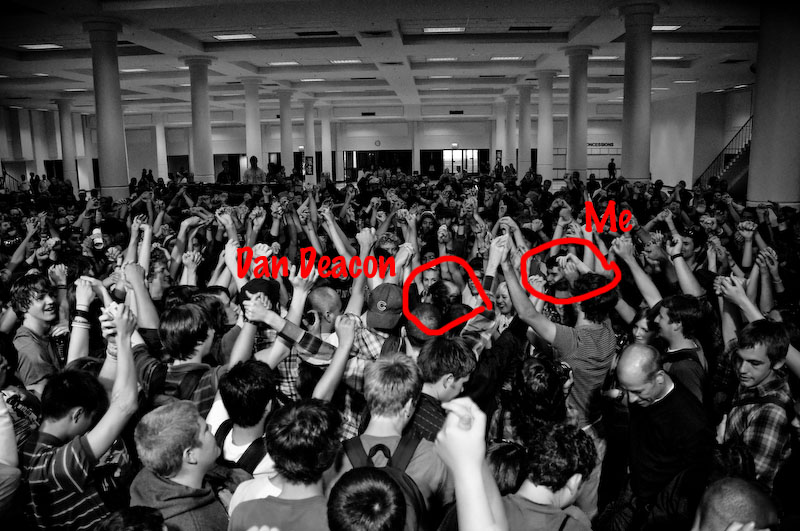 Rushed over to this (at the other side of the center) when the previous event let out. The band had just started, but there was no line, the ticket lady was happy to let me in, and there were plenty of empty seats. The lack of people was probably due to the very, shall we say, loud nature of the band; since the people invited were mostly kexp donors (an older age group and probably not this bands target audience). It was a nice place to sit and relax from the deacon concert, and had a much more relaxed feeling than the other venues.

Quite good, hadn’t heard of them before. Went over to the stage to wait for the battles, since there wasn’t anything I particularly wanted to see until then, and the kexp session was shorter than I’d expected. Ran down to the exhibition hall first to pick up an Ultimate Reality dvd, since I hadn’t had time to get a Deacon t shirt earlier and the booth was already mostly replaced with flobot merchandise.

Then I got a a nasty headache and went home, rather than suffer through the remaining few hours to wait in lines and see death cab.

I’ve started using twitter as a very easy way to update this site, and since it integrates well with my iPhone I wanted to show off another cool feature. [Twitterific](http://iconfactory.com/software/twitterrific) Provides a feature to change your twitter location to that of your iphone. From this base, it becomes very easy to add a map showing your location.

where [userid] is your twitter userid.
This Line downloads and parses your recent tweets. The xml format serialized by twitter also includes your current location

This line extracts the location coordinates from the twitter response.

where [key] is your google maps api key.
This is where you can fiddle around with the map to display. Google has an interactive [wizard](http://gmaps-samples.googlecode.com/svn/trunk/simplewizard/makestaticmap.html) to let you configure your options.

this line saves the map locally, so you can serve it from your own server and keep it cached. Additionally you can add overlays or manipulate the image before saving.

Some examples of what’s possible:

* IMDB API (Using SOAP). The only existing allows searching only a fraction of the database.
* Songbird interfaced Web-Based Music Library. Allowing for quick access to a remote library, with last.fm support. Need to allow for playlists as the cake-icing.
* Smart Ubiquity plugins for music and movie titles (the challenge is in natural language processing to determine what is a title)
* Decent Course Scheduling Application. (to be useful, a significant amount of natural language is needed here to spider and parse a college catalog, which will vary in format, be password protected, and span multiple pages.)

In preparation for my upcoming travels, I am reviving this blog using a new interface which will actively combine many of my online presences. If all goes well, I’ll be quite happy.